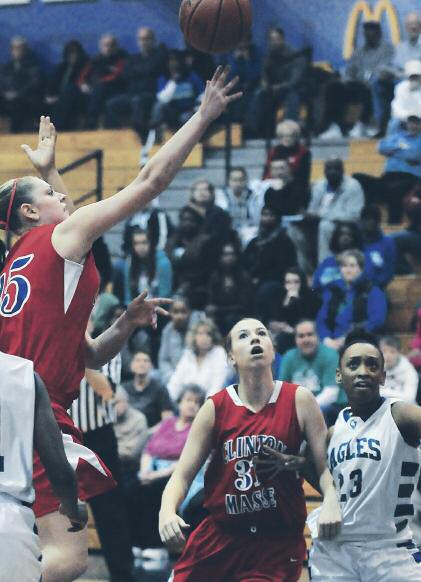 The Lady Falcon’s road through the playoffs came to an abrupt stop Saturday at Springboro High School.  The girls played a great game against #1 Chaminade-Julienne.  For a young team (CM has no seniors this year), they played very well and had to deal with full-court pressure the entire second half.

We are proud of the Falcons and see a bright future ahead.

Here’s the summary from the Wilmington-News Journal:

Where’s Bryce Drew when you need him? Running a play reminiscent of Valparaiso’s “Pacer” to upset Ole Miss in the first round of the 1998 NCAA men’s basketball tournament at the buzzer, Clinton-Massie (19-4) hoped to do the same against state-ranked Chaminade-Julienne (21-2).

“Brianna (Machado) made a great throw. Kasey (Uetrecht) made a great catch. We had an opportunity,” Massie head coach Allen Wilkinson said.

But CJ swooped in front of Uetrecht’s pass to Sydney Brackemyre to escape with a 44-42 Division II girl’s district semifinal victory at Springboro High School Saturday.

It was a heart-breaking defeat to the state’s fifth-ranked team in Division II (The Associated Press). The Falcons led from late in the first quarter until the midway point of the third quarter.

Massie led 8-4 after the opening period on the strength of six points by Brackemyre. She scored the first four points of the second quarter to double Massie’s lead. The Falcons extended their cushion to 18-8 with 3:21 left in the half. The Falcons held a 20-13 advantage at the break, led by Brackemyre’s 12 points.

“Our defense did an excellent job,” Wilkinson said. “I think it frustrated them. We didn’t allow slashes to the basket. I thought we did a good job rebounding and holding them a lot of one-and-dones.”

Brackemyre finished with a game-high 16.

The Eagles opened the third quarter with a 10-2 run, scoring off four Falcon turnovers and finally getting those slashes to the basket, to take a 23-22 lead. After Brackemyre’s only field goal of the second half briefly gave Massie back the lead, Emily Michael buried a three to ignite a 7-0 run. Four of those points came off Massie miscues.

Michael shared team scoring honors with Krista White. Both chipped in with 14 points.

CJ led 32-27 entering the final period. Its lead bounced between three and six points until a Uetrecht bucket cut CJ’s lead to 44-42 with a little more than a minute left in the game.

The Falcons were within three points of CJ on four occasions but could not get that crucial stop or bucket to tie the game.

CJ missed the front end of a 1-and-1 with 51.7 seconds left, setting up a Falcon possession during which they had five cracks at the basket. Brittaney Jefferson finally yanked down the rebound and headed to the line where she misfired on the 1-and-1 with 12.3 seconds left.

She tracked down her own rebound and was able to get the ball to Erinn Bailey, whom the Falcons promptly fouled with 5.8 seconds to go. Bailey missed the free throw, but CJ secured the rebound yet again. Raytea Long headed to the line with 3.9 seconds left. She missed and Massie secured the rebound, setting up its game-winning attempt with 3.3 seconds left.