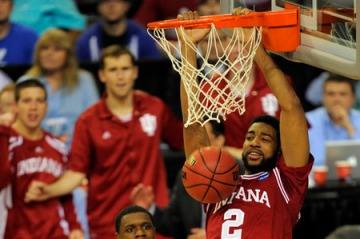 Just read some good news for IU basketball fans…Zeller and Watford are staying in school!  Here is the article that came across Twitter from The Crimson Quarry.

Jeff Rabjohns of Rivals.com is reporting that Cody Zeller and Christian Watford are both staying put. This is magnificent news for Hoosiers fans across the board. There was little doubt that Zeller was going to return for at least one more year of basketball but at one point certain NBA scouts thought it 90% certain Watford was out the door.

This is huge for Indiana as they now for certain return their starting 5 from the tournament run and 6 of their top 8 players in terms of playing time and production. Add that with a stellar recruiting class that is scheduled to hit campus June 16 and the preseason #1 ranking that IU currently has looks like it could be a legit thing as we get to the season in November. Depending on what Shabazz Muhammad and Nerlens Noel do tomorrow when they commit, Indiana has a great shot at holding onto preseason #1 assuming they don’t both go to Kentucky.