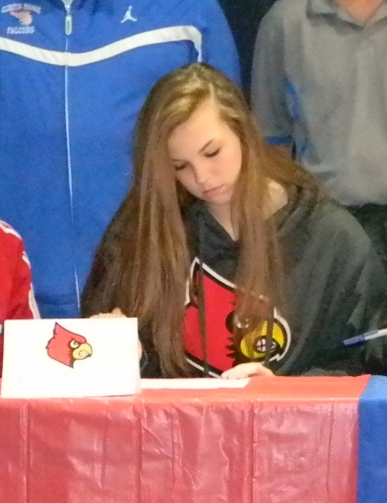 November 13, 2013 was National Signing Day and Syd signed her National Letter of Intent to play basketball for the University of Louisville. A few dozen Clinton-Massie students came to the auditeria to celebrate with Syd and Kasey Uetrecht. Kasey has been Syd’s high school and AAU teammate and one of her best friends. It was a great day to see them sign together.

Syd is in her third year with the Cincinnati Angels AAU team and we are just so grateful for the opportunities that have opened up to her through this great organization. Recently they updated their website and have had added more info about the organization, the teams, the coaches and other information. They also have a Commitments page that shows the former and current Angels that are playing basketball at the next level.

Last week the Cincinnati Angels did their own version of the Harlem Shake. I know not all the girls who play with the Angels were a part of it, but it is good to see them having fun together.

The Clinton-Massie Lady Falcons are District Champs for the first time in school history. It was an exciting game last Friday night as they jumped out to a lead over Norwood and didn’t let them back in the game. The defense the Falcons played was intense from the first through the fourth quarter.

The Wilmington News-Journal had an excellent article on Massie’s victory, which you can read below.

On a side note, the Cincinnati Angels (Syd’s AAU team) are well represented in this year’s tournament. The Angels sent out an email listing current and former Angels’ players whose teams are moving forward in the tournament. Way to go Angels!

Here’s the Wilmington News-Journal article on the Falcons’ win:

MASON – In late December, many had written off the Clinton-Massie girls basketball team after a devastating injury and tough loss to Wilmington.

“The girls have worked hard, and they had a goal,” said CM head coach Allen Wilkinson. “They’ve done all they could do to make that happen. They’ve faced many different types of adversity.

“We’ve always had someone different step up every night.”

Clinton-Massie executed offensively with high precision in the first quarter, jumping out to a 16-3 lead. For good measure, Kasey Uetrecht threw one in from 45 feet to end the first quarter. Massie led 21-8.

Then, the Falcons just wore them down.

Norwood, playing just six players for most of the game, slowly started to fade as the game continued. Outstanding freshman Hannah Tubbs, who came in averaging 18 points per game, was held to just 11 points on 4 of 12 shooting.

“We don’t press, we just put pressure on the point guard to wear her down,” said Wilkinson. “Brittany Smith and Miquela Santoro did an outstanding job on Tubbs. Mary (Moyer) did a great job on (Natalie) Stoeppel.”

Moyer and the Falcon defense frustrated Stoeppel at every turn, causing her to take two straight charging calls which sent her to the bench with four fouls in the third quarter. She finished with just two points.

“We tried to keep (Tubbs and Stoeppel) out of the paint,” said Wilkinson. “They like to get in the paint and get to the free throw line.”

Clinton-Massie (21-5) didn’t just outplay Norwood (21-4), they outworked them. The Falcons outrebounded the Indians 45-27 and chased down numerous loose balls for second and third opportunities.

With a berth in the state’s final 16 teams, the Falcons are playing its best basketball at the right time.

“The sky’s the limit with this group,” Wilkinson said. “I told them in the locker room that the only person that can tell you ‘no’ is yourself and you don’t have to listen to yourself.”

A couple of years ago Syd was given the opportunity to play AAU basketball with the Cincinnati Angels. It has been a great experience for her and all the girls that are part of that organization. They have enjoyed success collectively in many of the tournaments they have played in and have been given the opportunity to improve individually as players.

This week Coach Chris sent out a list of the players from this years’ Angels team that have committed to play at a Division 1 school. I know these have been posted on other social media outlets, but I think it is both a reflection of the work the girls have put in to improve as players and to the Angels organization for the opportunities they have given these female athletes.

This is the list. I’m sure we’ll see more Angels play at the next level in the future.

For the past few years, The Dabbelt Report gives a listing of the top players in girls high school basketball in the Dayton Area. Jim Dabbelt shares his opinion on who he thinks are the Super 20 and Top 100, plus the top 25 players in Cincinnati and the Fab 20 Freshmen in Dayton area. Syd, along with some of her Angels teammates, made the top 20.

Here’s his list (Cincinnati Angels are in bold – I did that, not him):

More Angels made the Top 100, along with two of Syd’s Clinton-Massie teammates, Kasey Uetrecht and Mary Moyer. Miquela Sanotoro, also from Clinton-Massie, made the Freshmen list.

Way to go ladies! Here’s to a great season!

The summer travel season is over and students (at least in our area) start back to school this week.  A few weeks ago, the National Women’s Basketball Insider posted their top 100 girls travel teams for this summer.  I totally get that everyone has their own opinion and different people see different teams more.  I thought it was impressive that several Ohio teams, including the Cincinnati Angels and Sports City U, made the list.  Whether you agree with where everyone is ranked is one issue, but it’s great to see the players from our area get on a national list.

You can see the original post and other news on the WBBInsider Blog.

The Angels are off to a great start this AAU season.  The 15u and 16u teams both won this weekend at the AAU Super Regional in Mason.  The 16u team crawled out of a 10-0 deficit in the first quarter and finished strong with a 20+ win.

A couple of weekends ago the Angels traveled to Chicago for the USJN Windy City Classic.  Blue Star Media featured four teams they watched in Chicago.  Here is what was written about the 16u Angels. (You can read the entire article here.)

Cincy Angels 16 (Cincinnati, OH): A while back Disney produced a baseball movie called Angels in the Outfield. The Cincy Angels could be cast in a basketball version called Angels on the Hardwood. If you’re a coach looking for size, you definitely need to take a long look at this team. This squad is stacked with talented and multi-skilled prospects.  Kayla McDowell loves to create off the dribble at 6-2 and the senior to be runs the floor in transition with the guards. She finishes well in the paint and has a nice shooting touch that stretches beyond the three point arc. Their Class of 2014 is very strong and has some depth. First one to catch your eye is 6-1 wing Sydney Brackemyre.  With a college ready body she’s skilled offensively posessing a nice face up game that includes a jumper that extends out to the three point range.  Brackemyre, in addition to matching up on the perimeter defensively, can also battle down on the block as needed. Jenna Gunn also has a strong build and good size at 6-0 that she effectively uses to defend and rebound. She handles the ball efficiently and loves to attack the paint with no reservations about contact.  Ana Richter has lots of versatility at 6-0 allowing her to play with her back to the basket or exploit her smooth midrange shot. Richter also does a good job of handling pressure and demonstrated good vision passing out of double teams.  Rounding out the Class of 2014 is 5-8 point guard Imani Outlaw.  She does an impressive job of attacking and creating in traffic but at the same time has a smooth reliable jumper. The Angels are a well-coached ball club with sound defensive principles. Their post players are well schooled fundamentally and contribute both in getting stops and providing offensive firepower. The Cincy Angels will not beat themselves and you’re going have to bring you’re “A” game if you plan on coming out on top.

The Angels got off to a great start to this year’s AAU season by winning the USJN Windy City Classic this past weekend in Chicago.  This was the first tournament for the 16u team (pictured) and the second for the 15u team (they won the Bearcat Classic last weekend).

Both teams look to be strong with the addition of some new players on both teams.  Excited about what the upcoming tournaments will bring.

Join 640 other subscribers
Thoughts from a Hoosier Fan in the Buckeye Land
Blog at WordPress.com.
Loading Comments...