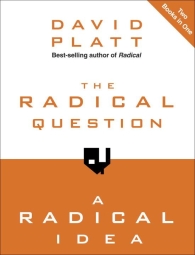 David Platt is the author of the New York Times bestselling books Radical and Radical Together. The Radical Question A Radical Idea is actually two books in one. While I have heard about Radical, I have not read it. This two books in one presents the basis of Radical and seeks to make application to the church today.

To introduce the radical question, he shared some statistics of those suffering around the world and compared that to some of the churches in the United States today.  He pointed to an article in a magazine where a church spent several million dollars on a new church building and a few thousand on a missions effort in another country.  One of the questions Platt asked was this:  “The cost of discipleship is great.  But I want to propose that the cost of nondiscipleship is far greater.”

In A Radical Idea, Platt looks at the church investing in people, not buildings and programs.  He shares stories of individuals and churches who have redirected their spending to focus more on reaching people rather than acquiring possessions and buildings.  I recall one church that moved out of their building and met in a parking lot so they could use the funds they would have spent on rent to reach people.

One of the things I appreciated about Platt is that he was asking the questions, while not acting as if he had all the answers.  He shared that his church is still in the process of what it looks like to live out this radical question.  I didn’t feel it was a condemnation of the church today as much as it was an effort to refocus our efforts.

If you haven’t had the opportunity to read Radical, this easy to read book will give you an overview of the concepts and challenge to implement them in your current culture.

I received this book from WaterBrook Multnomah in exchange for my review.