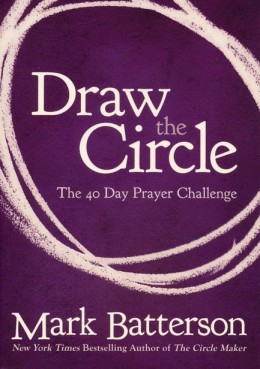 I was pretty excited when I saw that Draw the Circle was an available book in the BookSneeze list. I’ve read all of Mark Batterson’s previous books and appreciate his writing style. Several months ago I was able to purchase multiple copies of The Circle Maker to make available to some of our leaders here. Draw the Circle is a continuation of that book.

In this offering, Batterson builds on the principles of The Circle Maker, but also includes stories and testimonies he has received from people who have read his book. He designed this book to be a 40 day devotional and it came at a good time for me as I was just finishing up a Bible reading plan.

I have found Batterson to be quite quotable and my Kindle version of the book has a list of highlights from various chapters. While Batterson is a proponent of believers spending time in prayer, he doesn’t see prayer (or drawing prayer circles) as a way to get God to do what we want Him to do. In one chapter of the book, Batterson writes: “Sometimes the purpose of prayer is to get us out of circumstances, but more often than not, the purpose of prayer is to get us through them.”

Just a few pages later, Batterson makes this statement: “If we’re being completely honest, most of our prayers have as their chief objective our own personal comfort rather than God’s glory.”

Draw the Circle is a good resource for those looking to grow in the discipline of prayer. I found both Batterson’s words and the stories he shared to be both helpful and challenging.

I have mentioned in previous posts some of the podcasts I listen to on my iPod. I started listening quite a bit a couple of years ago when I had about a 35 minute drive to work. It beat the radio and I was able to take in some good messages.

I listen regularly to Andy Stanley from North Point in GA and Dave Stone and Kyle Idleman from Southeast in KY. In May, Dave Stone did a series on the family and in September Andy Stanley did a family series as well. As they talked specifically about parenting, they both said similar things that obviously came from the same source. The first time I heard it I thought it was good. The second time cemented it. While no one has all the parenting answers, I thought these were good insights.

While I’m not sure of the original source, they both shared the Four Stages of Parenting.  I think Dave made the comment not to get hung up on the age break down, but to focus on the process.  Both of them remarked that the stages need to be done in order and it becomes very difficult to go back and cover a missed area.

Both speakers who have children in the final stages, so they could speak with experience on going through each one.  They pointed out that each stage builds on the other as you see a progression toward maturity, independence and a change in the relationship between parent and child.  Andy and his wife shared one of their goals as parents was that when their children were adults, they wanted to come home and spend time as a family.

When it comes to discipline, there was an added insight thrown in.  Andy and his wife shared this from another couple’s philosophy of discipline.  As a parent with young children, you may feel you are disciplining all the time.  One couple shared their three nonnegotiable when it came to discipline.  Discipline was enacted for one of these offenses:

This would be a great resource to check out and to share with others.

It seems recently that more extreme parenting stories are making headlines. There was the guy who posted a video to his daughter about her Facebook post and then shot several bullets into her laptop.

This article is linked on Dayton Daily News website. My wife says she is the meanest mom in the world. This may surpass that.

FRIDLEY, Minn. — A mother and her boyfriend shaved the head of her 12-year-old daughter, then forced the girl to wear a diaper and run up and down outside their home near Minneapolis because she wasn’t doing well at school, police said.

Police arrested the 38-year-old woman and her 34-year-old boyfriend Monday night on suspicion of malicious punishment of a child, a gross misdemeanor. Lt. Mike Monsrud said the two adults laughed as they were hauled off in a squad car and apparently didn’t understand why officers had intervened.

A neighbor called police earlier that evening after a crowd of about 50 people gathered to watch the girl, who was wearing only the diaper and a tank top and was begging to be let back inside their townhouse in Fridley about 7 miles north of Minneapolis.

“When the officer found her, she was crying and hysterical,” Monsrud told the St. Paul Pioneer Press.Investigators believe she had been outside for about half an hour before the neighbor alerted police, Monsrud said.

The mother and boyfriend were being held in the Anoka County Jail pending charges. The girl and three younger children were placed in foster care.

The Associated Press is not naming the adults to protect the identities of the children.

The two adults told police they were punishing the girl because she had bad grades and failed to do her homework.

“They told her if she didn’t, they would shave her head and put her on ‘diaper duty,’ which I guess meant running up and down the street and cleaning up trash as a form of public humiliation,” Monsrud said.
The lieutenant added that the couple questioned the police’s decision to intervene.

“Through the whole contact, and even on the way to jail, both were laughing and thinking it was ridiculous police would get involved in what they said was their parental decision,” he said.

Officers had responded to four calls in the past two years at the family’s townhouse. At least one of the calls triggered notification to a county child protection worker, Monsrud said.