This story came across Twitter today from USA Today High School Sports website. It shares of a 5th grade boy from Florida that is playing on the varsity team.

I like this quote from the article: “If Jamie (his dad who is the coach) keeps his job, and Julian, who reportedly scored 91 points in three-quarters against middle school competition, doesn’t find a loophole that allows him to play in the NBA when he’s in 9th grade, the father and son duo could share the same high school court for eight seasons. That’s a crazy thought, not unlike a 4-foot-5 fifth-grader playing high school basketball.”

You can read the entire story on the USA Today High School Sports site. Below is the video that shows young Julian in action. 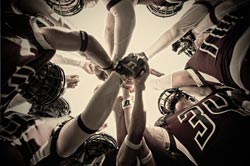 Several months ago there was a great story about a high school track athlete that quit running to help a fallen competitor finish the race. Listening to the radio this morning, I heard a similar story, this time on the football field.

A St. Clairsville, Ohio, football player was on his way to his 12th touchdown of the season, nearing the end zone after a 52 yard running play. He stepped out at the 1 yard line so a teammate could score a touchdown in honor of his father who just passed away from a stroke.

The player, who is a starter on the freshman team, plays sparingly at best on varsity and never lined up at running back. He followed his blocker and scored on the first play. It was his first touchdown and he said he knew his father was watching.

In a time where we hear of bad behavior from athletes – and parents, too! – it is refreshing to hear a story like this one.