7 Men gives a brief look into the lives of seven men who influenced the people of their time period and whose impact still endures today. Most readers will recognize the names of the men in this book, but probably don’t know a lot about each man’s story. The men featured in the book are George Washington, William Wilberforce, Eric Liddell, Dietrich Bonhoeffer, Jackie Robinson, Pope John Paull II and Chuck Colson.

Obviously each man is recognizable for something they accomplished – George Washington for being the first President of the US, Eric Liddell for refusing to run in his strongest Olympic event because it was held on Sunday, Jackie Robinson for breaking the color barrier in baseball. What 7 Men focuses on are the circumstances leading up to or following those well-known events. The author highlights the decisions and choices that were made that lead up to those notable accomplishments and what occurred afterward. For example, most of the chapter on Eric Liddell discusses the direction of his life following his Olympic experience. Most people know about his gold medal. Many probably don’t know what he did when the games were over.

7 Men provided an honest look at the lives of these men. The author shared both their successes and their shortcomings. It was a good read that might prompt the reader to investigate more information about these men than what these shorter biographies provide.

Last year we did a Video Scavenger Hunt with our students and had a great time. So…we’re doing it again! We are wrapping up our Small Groups for this school year and wanted to do something memorable to end it. Check out the invite below:

Here’s the video from last year: 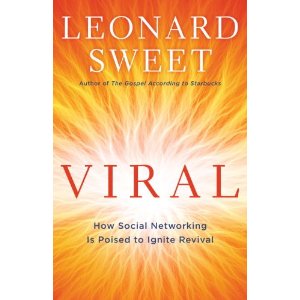 I’ve had the opportunity to hear Leonard Sweet speak on one or two occasions and have read some of his other writings.  I like his insights and how he sees how the church can impact culture.  I also find myself having to read a paragraph a couple of times to really grasp what it is he is trying to say.  While he is a student of culture, he also brings his love for history and poetry into his writing.  He definitely challenges your thinking.

In Viral, he draws a distinction between two groups of people.  One groups he called “Googlers.” Sweet sees them as natives to the culture of social media. The other group he calls “Gutenbergers,” meaning those who grew up in the culture of the printed word. I found it slightly ironic that his message about a more digital form of media arrived to me in printed (paperback) form.  I think it shows the continued tension that exists as part of our culture has embraced the digital while others cling to printed text.

Sweet uses this acronym in his book:  TGIF.  It doesn’t refer to the well-known phrase many use as they anticipate the weekend.  Instead, he gives it new meaning to highlight the growth of social networking:  Twitter, Google, iPhone, Facebook. In his book, he explains the impact of each of these on our culture.

One of the big distinctions Sweet points to about the Googler versus Gutenberger culture is the idea of connection.  Those who have embraced social media in its many forms are about connecting with others.  While some in the Gutenberger camp see the connections as superficial, for the Googler, they are relational connections.

Sweet encourages the church to take advantage of the desire for connection.  Throughout Viral Sweet looks at ways the church and individual Christ followers can make use of social media to advance the message of Jesus.

Viral would be a good read for both the Googler and Gutenberger.  Social media has and will continue to impact our culture.  Our response will be how we chose to make use of it.

Yesterday I posted about our recent trip to the Master Provisions warehouse. Here is a two-minute video showing the highlights of our work and a small look at what takes place in the warehouse.