Hard to believe that twenty-two years ago Josiah made his appearance into this world. He was born in Defiance, OH (it’s kind of funny to say he was born in defiance – get it?), moved to Kentucky, to Indiana and then back to Ohio. He is keeping busy with school at CCU along with working three different jobs on campus.

I was looking back at past posts about Joe that have involved marching bands, mission trips, his stroke in middle school family gatherings and even past birthdays. My how time flies!

This morning I was thinking about and praying for Joe and especially the opportunity he will have this summer for an internship. I’m looking forward to where God leads him in that venture and how that will direct His future. 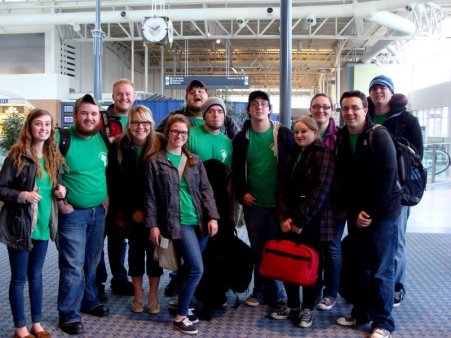 Joe made it back from Ireland! They didn’t have any problems on the return trip and from everything I’ve heard so far, it was a good experience.  Joe loves to visit other places.

This picture was (once again) snagged of Facebook and is a photo of the Ireland group.and seemed to really enjoy the Ireland experience.  We’re looking forward to hearing more about it and seeing some pictures of the country.

As many of our friends, family and church family know, Joe is on a mission trip to Ireland with a group from Cincinnati Christian University.  They left Friday, but were delayed getting out of the Cincinnati airport due to the bad weather.  Once they left, they made connecting at JFK and flew to Dublin.  The only news we have received so far is a Facebook post that says “I am in Ireland safe and sound. Thank you for all the prayer!”  (The picture is one I snagged off his FB and I have no idea where they are or what they are doing.)

It’s a strange feeling knowing your son is in a different country, especially when you are used to sending a text to touch base.  I know he was looking forward to the trip and experiencing a new culture.  The group is doing a VBS and Joe is speaking one night to a group of teens.  Should be a great experience and can’t wait to hear all about it.