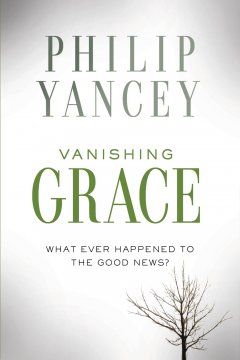 It’s been a few years since I’ve read a Philip Yancey book. Reading Vanishing Grace reminded me why I appreciate him as a writer. He is an intelligent, yet humble author. It is obvious throughout the book that he has spent a great deal of time in research. He quotes a number of different writers and speakers that span a variety of academic disciplines and faith backgrounds.

Reading his past works makes it clear that Yancey is a follower of Jesus and in this offering he discusses how the modern church is doing representing Jesus to the rest of culture. In the final chapter of the book, he writes this, “I care about vanishing grace, the erosion of a gospel that, for many, sounds less and less like good news.” While it is clear that he comes from a specific point of view regarding Christianity, he doesn’t allow that to blind him as he explores the topic. In one chapter of the book, he shares about an experience attending a New Age seminar and listening to a well-known speaker in that arena. Yancey took that as an opportunity to not judge the beliefs of those attending the seminar, but rather to seek to understand.

In one candid moment in the book, Yancey shares a bit of guilt he feels as he sits in an office wrestling with words for books while there are others who are serving on the front lines. While he sees the value in what he does as an author, he maintains a humble perspective on his role.

Vanishing Grace seeks to address how the church can continue to live out the good news to those in our culture. He references a list of complaints about Christians in the magazine Christianity Today: Christians are seen as those who don’t listen, who judge, whose faith confuses people and who talk about what is wrong instead of making it right. Yancey shares stories of those who are doing a good job engaging culture and modelling the good news while also identifying where the church is falling short.

In the book he talks about three different roles Christians can play – as pilgrims (those who live authentically), as activists (those seeking to address various social issues), as artists (using art and creativity to share the good news). Near the end of the book Yancey writes this: “Pilgrim, activist, artist – whatever our calling, we join together to proclaim the good news that God has commissioned us to announce to the world.”

Vanishing Grace was a though provoking book and challenges those in the church to take a look at how we represent the good news to our culture.

I’ve been reading a book by Philip Yancey called Vanishing Grace. His book is an exploration of why the church doesn’t seem to be doing a good job of demonstrating grace to the world. The question he asks is “What ever happened to the good news?” Through the book he talks about our world having a thirst that only God can satisfy, yet the church doesn’t always good job of presenting how God can quench that thirst.

Yancey explores some questions about the importance of faith and how people are searching for meaning. One area he looks into is science and how some scientists are pointed to God as they study. One extraordinary example he uses is Alexander Tsiaras. Tsiaras is a professor at the Yale Department of Medicine and has written software that utilizes MRI technology. He developed a video that he presented at a TED talk which compresses the nine months from conception to birth into a nine minute video.

I looked it up and thought the video and the facts shared through it are pretty amazing. Tsiaras shares in his TED talk about the complexity of the development of a baby and makes this observation: It’s a mystery, it’s magic, it’s divinity. It speaks so loudly as evidence for a creator.

This is the video he made (there are some graphic images).