Started reading “Viral” by Leonard Sweet. Good quote about how people approach their faith. Some see it as an opportunity to connect while others look at it as a position to defend.

“Trust me, 520 million-plus human beings from around the world do not log onto Facebook so they can get into an argument. They do it to connect to other people.” 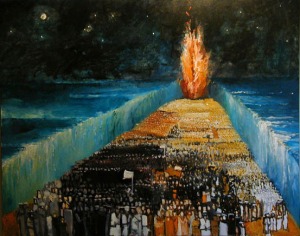 My YouVersion reading yesterday (Day 100) told the account of the death of Moses.  He had been faithful to God in leading the nation of Israel out of slavery in Egypt, through the Red Sea and on the edge of the Promised Land.  Israel allowed their fear of the inhabitants in the Promised Land to overcome their faith in God.  As a result of their disobedience, they were forced to wander in the wilderness.

After 40 years, the day of taking possession of the land arrived, but Moses was unable to lead them in.  He didn’t follow God’s instructions so forfeited his right to lead them in.

In Deuteronomy 34, we read of the death of Moses.  These following verses contain a pretty powerful testimony to the life he lived:

4 Then the Lord said to Moses, “This is the land I promised on oath to Abraham, Isaac, and Jacob when I said, ‘I will give it to your descendants.’ I have now allowed you to see it with your own eyes, but you will not enter the land.”  5 So Moses, the servant of the Lord, died there in the land of Moab, just as the Lord had said. 6 The Lord buried him in a valley near Beth-peor in Moab, but to this day no one knows the exact place. 7 Moses was 120 years old when he died, yet his eyesight was clear, and he was as strong as ever. 8 The people of Israel mourned for Moses on the plains of Moab for thirty days, until the customary period of mourning was over.  9 Now Joshua son of Nun was full of the spirit of wisdom, for Moses had laid his hands on him. So the people of Israel obeyed him, doing just as the Lord had commanded Moses.  10 There has never been another prophet in Israel like Moses, whom the Lord knew face to face. 11 The Lord sent him to perform all the miraculous signs and wonders in the land of Egypt against Pharaoh, and all his servants, and his entire land. 12 With mighty power, Moses performed terrifying acts in the sight of all Israel.

Buried by God…imagine the Creator of all things taking on the task of burying one of His servants.  It speaks to the relationship that Moses had with God…a face to face relationship like few others had.

When it comes to the end of our lives, what will be written about us?

Many years ago, a “standard” youth group event was Destination Unknown.  Students would be given specific information like where to meet, when to leave, the time of return and any cost.  Other than that, the details were kept a mystery.  We brought D.U. back last year and our students loved it.  The adults loved it, too, just because the students hated not knowing and we got to keep the information from them (insert evil laugh). Last weekend we did a D.U. and went roller skating.  Several of the students figured it out before we left, but we still had a great time.

One element that D.U. throws into the mix is the fact that it is just fun.  It’s great to get together with students and hang out together and have a good time.  The unknown factor adds to it as well.   Glad that we have fun with the students in our ministry.

Check out our video from the event.  As you can see, some of us are more adept at skating than others.