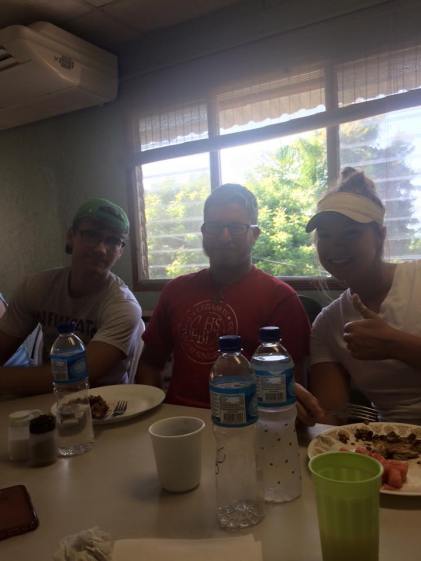 My last post about Syd’s trip generated quite a bit of traffic, so I thought I’d share a quick update. The group has occasional WiFi connection, so Syd has put a little bit on her Facebook and Instagram.

They arrived safely after a few flight delays. Syd posted a pic and a video on her Instagram which showed some of the kids they have served through the shoe ministry. The picture to the left was sent through email giving a quick update on the group. The message said they were celebrating one of the group member’s birthdays. Looks like all is well!

Thanks to all who have been praying for the group. Below is a group pic. 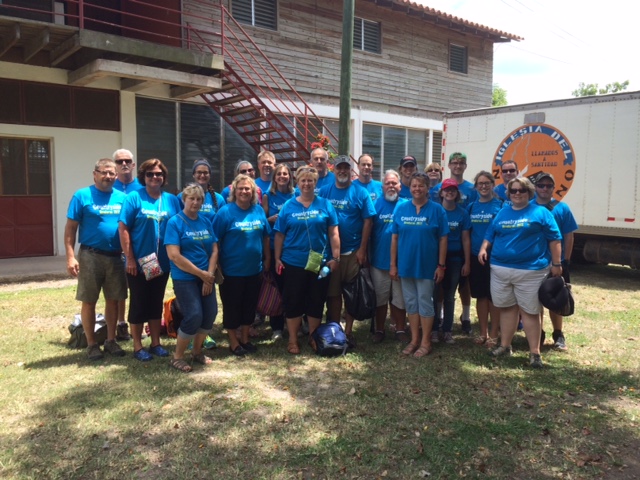 For most of the summer Syd has been on campus at Louisville taking classes, working out and doing rehab on her knee. She took a break this week to go on a mission trip to Honduras with her mother’s church. They will be doing construction work and providing a shoe ministry.

The Courier-Journal, a newspaper in Louisville, ran an article on her trip. I thought that was great that they would take the time to promote Syd and her fellow travellers in this ways – until I looked at the title of said article – Sydney takes “a risky ministry trip.” Not the thing that parents want to read about.

This is a good opportunity for her and I know she is excited to be able to participate. Here’s the text of the article. I’m sure all those who are taking part in the trip and their family members back at home would appreciate prayers while they serve in Honduras.

At the time of year most teammates are on campus and focused on basketball, Louisville women’s player Sydney Brackemyre on Friday left for a city often referred to as the murder capital of the world.

The Ohio native’s home church raised $10,000 to build a worship space in a small town outside of San Pedro Sula, Honduras, and with it the group took hundreds of shoes for children in the impoverished Central America nation.

“My family has just always been about service, and it’s something really important to me,” said Brackemyre, who redshirted her freshman season at U of L after suffering a preseason knee injury. “In high school, I was always so busy and working hard. I never got to go outside the country. So when this came up through my home church…I really just couldn’t turn it down.

“Coach (Jeff) Walz has been amazing letting me go because this is the time everybody is getting better. But he’s letting me go and get off campus, so I’m really grateful for that.”

Brackemyre’s trip will tally nine to 10 days, with a week in Honduras bookended by lengthy travel there. Inspired by her grandfather, who has ministered in South America and Asia, the 6-foot-1 forward said her group from Countryside Church of the Nazarene will construct the first such facility in the area.

“It’s somwhere where they really need a church,” she said. “We want to show them love and compassion — reach out to them and know this church will be available to them.”

Mostly, Brackemyre plans to work with area children, who attend a half day of school and will then open up their days to the Countryside Church group. That’s where the 500 or so pairs of shoes come in. Brackemyre and other ministers will wash kids’ feet and gift what, for some, my be their first pieces of proper footwear.

She also has planned games and activities, one in which the former five-star recruit may get to show off a bit.

“My goal is to do a sort of basketball camp,” Brackemyre said. “We’re going to take a ball and see if there’s a rim or court around there. I’d love to show the kids and teach them. I know resources are slim, but that’s something I’d love to do.”

Brackemyre still has an eye on the upcoming season. She passed a number of clearance tests the last two weeks toward a return to full playing strength back from a torn ACL and meniscus in her left knee.

“My trainers have done a really good job making sure I’m equipped to go and won’t be losing anything while I’m over there,” she said. “When I come back, I should be ready to go.”