Someone sent the link to this video to me the other day.  I think it is actually a video to promote the song that is playing, but the dribbling is pretty sweet.

If you read my blog with any sense of regularity, you will see I repost stuff from Jim Dabbelt’s blog. He follows girls basketball in our area and does a great job highlighting the individuals and teams that are performing well.

In a recent blog post, he identified five players from each class (2013, 2014, 2015) that are playing this summer that he deems elite players to watch. Syd made his list for the class of 2014. Below is the listing from her class. You can read the entire list on his blog.

One kid who exploded onto the scene last year is Sydney Brackemyre from Clinton Massie.  While this site introduced her to the Miami Valley as a freshman, she has introduced herself to all the major college coaches around the country with some outstanding play.  Explosive and athletic, and according to Jenkins, she has earned her spot among the top 3 juniors in the Dayton area.  He stated there isn’t a thing she can’t do, she is quick and skilled enough to play the perimeter.  While her dedication to the game is huge, her stock has gone through the roof.

Another kid who has drawn the attention of those “in the know” is a young lady who has become one of the top all around guards in Ohio in the 2014 class.  Ashton Lovely from Greeneview is a dynamic scorer, and has very deep range to stretch a defense.  Lovely also does a nice job to create her own shot, and can set up her teammates with solid passing.

Last year, she snuck onto the scene at Oxford Talawanda.  Now, there is no place she can hide on the court, as Ana Richter has developed into quite a talented player.  She has a great basketball frame, is fundamentally sound, and is a team player.  Jenkins stated that she sacrifices her own offensive game for the better of the team to win basketball games.  She is a tough kid who just loves to win.

Makayla Waterman from Fairmont continues to mend, and get back to her dominant level of play.  Remember, it takes 12-15 months for a knee ligament to completely heal, and while she is approaching the 12 month mark, she continues to draw the praise from college coaches everywhere.  There is no more of a passionate player across Ohio than Makayla.  Jenkins- “She is an exceptional passer, has great hands, and the best court awareness of any front court player in Ohio.  She makes tremendous decisions and is tremendously skilled.”

If there was one kid I can start a team with, it is Kathryn Westbeld from Fairmont.  She is likely the best all around player in the area, when you take into account all aspects of the game.  According to Jenkins, Kathryn is the biggest mismatch mightmare in all of Ohio, regardless of class.  She is deceptively quick, has great hands, and honestly, when she wants to score, she will.

The Cincinnati Angels finished 3-1 over Memorial Day weekend at the USJN Toledo Tournament.  Mark Lewis of Blue Star Media was there providing a few twitter updates which helped those of us who couldn’t get up north for the games.  He had a nice recap of the weekend and featured a couple of Angels players, including my favorite one on the team.  Here’s what he wrote about them specifically.  You can read all of this thoughts on the Blue Star Media site.

The Cincy Angels may have not had a full roster nor did they play their best basketball but its hard not to still take notice of the talent on hand.  Swing player Sydney Brackemyre (Harveysburg, Ohio – 2014) already has major offers on the table but there could be plenty more knocking once July rolls around.  Combining good size at 6-1 with strength and skills makes her a tough assignment defensively.  The ballhandling is there to get to the rim but the form and range will force tight closeouts as well.  There’s a patience to her game on the catch that allows her to read and break down defenders.  The tools are there to defend both the forward and wing spot and she has the agility to be a factor in pressing situations.  Brackemyre is already well suited for the college game and what she does the next two years will determine just how far she can take her game and at what level.

Brackemyre wasn’t the only standout for the Cincy Angels.  Point guard and recent St. Bonaventure commit Imani Outlaw (Cincinnati, Ohio – 2013) demonstrated the game that has Jim Crowley’s staff excited up in Olean.  The 5-8 Outlaw was on constant attack and made things happen both off the drive and from the perimeter.  Using her explosive first step she got by on ball defenders time and again converting at the rim and from a consistent pull up.  She also added several deep jumpers that forced opponents to commit to containing one element of her attack or the other.  Defensively her physical strength offsets any lack of size and allows her to contain and steer opposing ballhandlers. 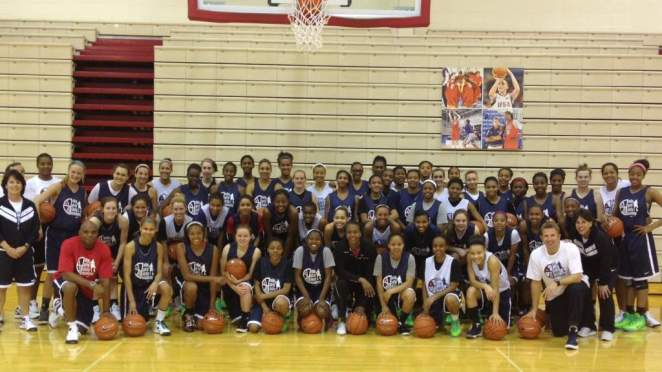 Syd had the opportunity to participate in the Nike Skills Camp in Indianapolis last April.  It was an invitation-only event and she was in camp with some talented girls.  It sounded like a good experience, both for skill development and hearing from others who have been involved in women’s basketball on both the college and professional level.

Ganon Baker directed the camp and shared his thoughts on the Indy camp and another one he directed in Oregon.  You can read all of his comments on his blog, but there were several things that jumped out at me as I read his recap.  They apply not only to basketball players, but to everyone.  These are thoughts from some of the speakers that shared at the camps.

– Every time you are in front of the media you have a chance to represent your team, family, and yourself

– You get 1 chance to make a first impression, so have a presence, self-confidence.

– Best gift you were given was your Name!!

– Be honest with yourself, family, and teammates. Everything you say will be recorded so whatever you say will live forever!!  Think about it!!

– No one is successful by themselves

– Sports teaches you how to win and handle disappointments

– The hardest part of making a decision is telling someone no!

– Watch your body language, somebody is always watching you

– You represent your God, family ,team, school, and self.

– Ladies, clean up your twitter/facebook pages – you are always on record! (That applies to guys, too!)